Our BLG book this week was Rosie Revere, Engineer written by Andrea Beaty and illustrated by David Roberts. Thanks to Magnus, our BLG reader this week, for sharing this title with us! 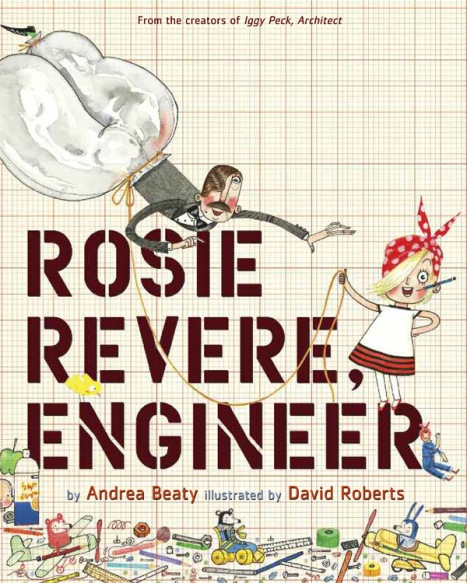 There are many reasons to treasure this book. The illustrations are absolutely fantastic. Our hero is a heroine – little Rosie who has big dreams of building, inventing and creating. It inspires the question . . . what might you want to be when you grow up? And then there are the themes that we can never have too much of: perseverance, courage, creativity, invention . . . But best of all, it reminds us that on the path to everything there are failures and mistakes and that we can celebrate the effort as much as the success.

The cover reveals one of Rosie’s inventions – helium pants! The story itself is full of amusing and unique creations dreamed up and built by young Rosie.

The plot? It is hinted at in delightful ways through these student reviews:

Joeli rates this book 3/5 and writes: Why Rosie calls it a cheesecopter instead of a helicopter? Why did Rosie’s Great, Great, Great Auntie make fun of her when she fell? How is falling from a helicopter funny? Then her aunt told her the first might be a mistake but the second try, the better it is.

Soleen rates this book 5/5 and writes: I like the part when she tried to be an Engineer. She was really brave because she kept on helping. She helped her Aunt. Rosie build a cheesecopter to try and help her aunt. She didn’t give up. She will always love to invent.

Jerry rates this book 4/5 and writes: I liked when Rosie picked one of the old things from the garbage and she bring it home and she is gonna invent something good and new. But then her aunt said she built an airplane before when she was a pilot. Then Rosie thought of something that she want to be a pilot too. Rosie build a helicopter. She fly to the sky, then Rosie crashed down. Her Aunt laughed but she wasn’t really laughing.

Ava rates this book 5/5 and writes: My favourite part was when Rosie made a cheescopter to make her Aunt fly. There is a lesson in this book to believe in yourself. Rosie Revere was so brave to stand up for herself.

Kevin rates this book 5/5 and writes: I love that Rosie build engineer stuff so her Aunt can fly. I like that she used old stuff into new stuff and build an invention. She is a brave girl. I like when she build a cheesecopter. She is not a quitter. Rosie failed but she did not give up. She worked so hard to build a plane for her Aunt. She did a perfect job. She is a good builder.

Brian rates this book 3/5 and writes: Rosie never gave up. She made a really big cheesecopter. She builds really cool things. Rosie is really brave. The Great Aunt laughs at her.

Kassidy rates this book 4/5 and writes: Rosie was happy to be building stuff for other people. Her Aunt Rose was laughing but she did not care about that. She is shy and she still builds stuff. She helped her Aunt build stuff. She made pants to fly. Now she builds stuff with her Aunt. Her Aunt believes in her. Rosie did not believe in herself. But now she does.

Calvin rates this book 5/5 and writes: Rosie was nervous to share. But she was brave. She wanted to be an engineer. Her Gramma was proud.

Heman rates this book 4/5 and writes: My favourite part is when Rosie built a cheesecopter. I noticed that Rosie was shy. Rosie was sad when she failed and her cheesecopter broke. Rosie liked building stuff. I like the rhymes in this book. When I grow up, I will be an architect.

Steven rates this book 5/5 and writes: Rosie made a plane. She was sad because her plane broke. She is happy because she keep trying.