The subject of peace is one that we need to continue to explore with children, even young children who have questions about events happening in other parts of the world or other times in history. When I talk about peace with my class, we talk about peace being a world where we feel free to be who we are and free to experience moments of happiness with those that we love (friends and family) For this reason, I have also included picture books that focus on celebrating our world and our relationships.

Here are some of my favourite picture books that explore the themes of peace and war. Please add titles that you love in the comment section!

The Silver Path written by Christine Harris and illustrated by Helen Ong. This book is written as a letter from Niko to his penpal Penny. Niko tells Penny about what is going on in his world after he has fled his village in an unidentified land from a conflict not named. His father has been taken to a prison camp and he and his mother are refugees. He writes of  memories of his home, his love for his father and his dreams of future happiness. A very powerful little story that reminds us that children in many parts of the world do not experience peace like children somewhere else might. Lots of unanswered questions make it an ideal story to discuss.

A Child’s Garden (a story of hope) written and illustrated by Michael Foreman  A little boy lives in a place defined by war – rubble, destruction, houses without walls or doors. One day he finds a speck of green amongst the dirt and dust and begins to nurture a seedling that grows into a beautiful vine. At one point, the soldiers on the other side of the barbed wire fence destroy the vine. It is devastating. Yet, soon seedlings begin to spring out of the ground again on both sides of the fence. A tribute to promises of peace and resiliency of the human spirit.

Whoever You Are by Mem Fox is illustrated by Leslie Staub. I include this as a book about peace because it reminds us with gentle, lyrical text that we are all the same in many ways no matter how we look or where we are from. “Joys are the same, and love is the same. Pain is the same, and blood is the same.” A beautiful book that celebrates diversity and our shared Earth. 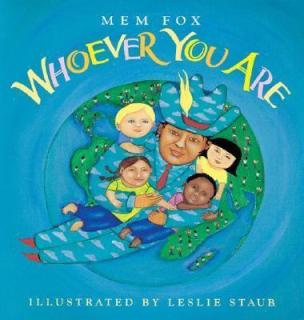 All the World is a Caldecott Honour Book illustrated by Marla Frazee and written by Liz Garton Scanlon. Simple rhyming text pays tribute to the small simple things our world has to offer like a tomato blossom or a fire to take away a chill. But it also celebrates through Frazee’s absolutely gorgeous illustrations, the majestic purply sky at the edge of the ocean or a thunderous downpour that comes out of nowhere. The images are comforting, saturated with details and evoke our own memories attached to the experiences suggested by each picture. These pictures connect all of us to our love of family and our time spent together.

Why by Nikolai Popov. This is a stunning wordless picture book that sends a powerful message about the futility of war. A little arguement between a frog and a mouse escalates into a full blown war. Children always become incensed at how senseless the fighting is and much talking follows. One of the best books out there to fuel discussions. Children always respond passionately to these images.

Paulie Pastrami Achieves World Peace by James Proimos Really, how can an eight year old achieve world peace? By realizing his world is all around him and simply starting to perform acts of kindness both random and deliberate (an apology to his sister) and simple and creative (he reads to trees :-)). Imagine if everyone set out each day to be kind, compassionate and loving? We can all model peaceful ways and make a difference.

Full of quotes to read, share and ponder. Love the message that peace needs to be everywhere (in our hearts, homes, schools, countries . . .) in order to impact peace everywhere else. Beautifully illustrated. This is a book to share a little at a time and rich with discussion inspiration.

For students in late primary/intermediate grades (3-7):

Gleam and Glow written by Eve Bunting and illustrated by Peter Sylvada This is truly one of the most powerful picture books I own. It paints a grim picture of a family impacted by war in Bosnia but it speaks to such hope and resiliency of the human spirit. This story is inspired by true events which adds to its impact. A family must leave their home, joining others that flee the area just ahead of the approaching enemy. The family releases two goldfish left by a stranger into the pond on their property. After spending months in a refugee camp, the family returns home. Everything is destroyed but when they reach the pond, they find that the fish have not just survived, they have thrived. The pond is teeming with golden fish representing the possibilities of renewal and hope. Stunning illustrations.

Sami and the Time of the Troubles by Florence Parry Heide and Judith Heide Gilliland and illustrated by Ted Lewin. When I talk about war with children, we talk about human rights and that war robs children of their rights to be a child, to play, and often to attend school. This book set in Beirut, Lebanon introduces us to ten year old Sami who spends much of his time hiding with his family in his uncle’s basement listening to the bombs. The family is fearful and sad but also reminisce of a happy past and express hope for future peace. When the bombs briefly stop, a semblance of regular life resumes in the streets revealing a glimpse into happier times. A beautiful book that gives children vision into a little boy’s life who has only known war and conflict.

The Cello of Mr. O written by Jane Cutler and illustrated by Greg Couch. Another story where children struggle to find little moments of play and mischief amidst war all around. Children in an apartment building bother an old musician (Mr. O) whom they view as grumpy and cross. When a Red Cross relief truck is destroyed and the community fears they will be completely cut off from aid, Mr. O takes his cello to the centre of the square and plays, risking his own safety with every note. The music is hauntingly beautiful, a heroic and beautiful gesture to his neighbours who were close to giving up hope. A powerful book that inspires so many discussions. Intrigued by this story? Read this adult novel: The Cellist of Sarajevo by Steven Galloway. 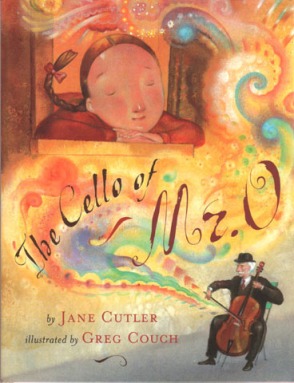 The Conquerors by David McKee This is a new favourite of mine. A modern fable that points to the ridiculous nature of war in the most clever of ways. A general marches his army about conquering every country around. Eventually, there is just one small country left. When the soldiers arrive to once again conquer a people, this little nation offers no resistance. They welcome the soldiers to their tables, to play their games, to sing their songs and to listen to their stories. When the soldiers return to their own ruling nation, they continue singing the songs, cooking the food and telling the stories of this little nation. Just who had conquered who? Oh . . .the possibilities for discussion. McKee is called genius in some reviews of this book and for good reason.

When I Grow up, I will win the Nobel Peace Prize by Isabel Pin A very interesting read. I would recommend reading it carefully first before sharing it with a class. The power of this book is how the text and illustrations do not match in any way. A little boy tells us how when he grows up he will be awarded for his notable peaceful actions and kindness. Yet, in his daily boyhood actions, he has not even begun to embrace anything he aspires to be. For example, he states “I will protect the environment and help save the planet.” The accompanying picture shows him hanging out of a tree with his friends using the branches they have broken as pretend swords to battle with. The message is very clear: peace begins with each tiny step that is right in front of us and around us always. The time to begin is now if we are really going to change the world.

6 thoughts on “Peace and War”