There is power in sharing stories together!

To read more about #classroombookaday routines and for title ideas, here are some fantastic resources.

#classroombookaday was started by Jillian Heise who was inspired by Donalyn Miller’s #bookaday twitter hashtag.

On Jillian’s blog: how #classroombookaday got started and yearly updates since – read here

Listen to an informative and information packed podcast on Books Between with Jillian Heise.

Check out the #classroombookaday twitter feed Regular photos of books and weekly themes are posted here.

**I often get asked about the magnetic ledges I display #classroombookaday titles on – these are magnetic display trays from Lakeshore Learning.

On my blog, I frequently make lists and I keep a list of them here. There are numerous themed lists here (both fiction and nonfiction titles as well as novels).

I share my #classroombookaday titles around a theme each week. If you are interested in the theme approach, here are a few themes to get you started with possible book lists. I’ve included 5 books with each theme as suggestions – with a mix of more recently released and older (released 2 years or more ago) titles. This is just a beginning! Many of these titles could be used for multiple themes.

Being Who You Are:

Coming to a New Country: 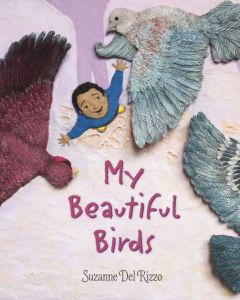 For more nonfiction themed lists visit this link on my blog. Lots and lots of titles!