Bear in Love written by Daniel Pinkwater and illustrated by Will Hillenbrand was our BLG book this week. Thank you to Deborah for sharing such a sweet, gentle story – an ideal story to hear as our school participates in The Great Kindness Challenge 🙂 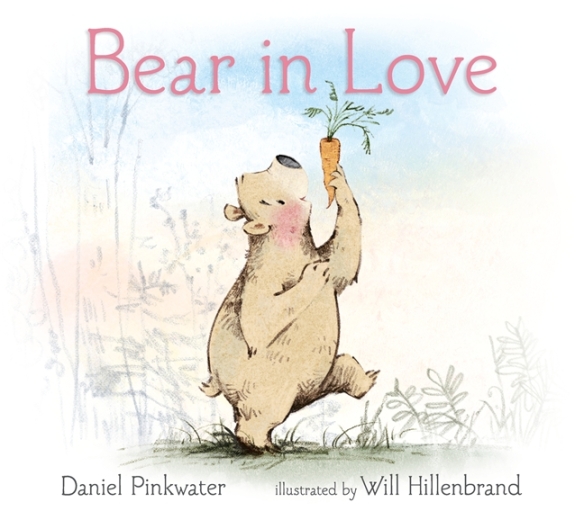 This really is such a comforting little tale about kindness and being generous. A bear finds a carrot on a flat rock and decides to taste it even though he has no idea what it is. When he loves the crunchy flavour, he devours the whole thing and sets off on a walk through the woods singing a little tune about this delicious treat. The next day, there are two of these delicious orange things on the rock outside of his cave! This inspires more eating and another little song! Every morning there are more treats left for him and he begins to feel that someone must like him. A delightful feeling!

Gracie had a great question after the bear had made a few discoveries: “But how does he know that those are left for him?” We decided that they were left for the bear because somebody had left the treats on the flat rock outside of his little cave. Eventually, the bear decides that he will also leave gifts for this generous creature who has left him so many treats. He tries to stay up and keep watch to discover who it is but always falls asleep. Some of the gifts are so lovely – a carefully stacked tower of blueberries, a chocolate bar with just two bites missing . . .

Finally bear and bunny meet, convinced they have each found the perfect friend. For bear it is a cute little bear and bunny thinks he was found a lovely big strong bunny. Confusion aside, the two friends sit together and chat and sing as the sun goes down. A feel good book that made us all smile!

Ethan: He was doing an act of kindness! The bunny started to give some carrots. I liked the book because it was happy.

Shereese: I like when Bear was falling asleep. I love the part when he left the blueberries. And when he was wondering who was leaving the gifts.

Kevin: My favourite part was when the Bear was hungry and then I felt hungry too. What’s the bunny’s name? He looks so cute. Where does he live?

Ashley: The bear was falling asleep. The bear was nice to the rabbit. I like the title because it has the word love. I like it because I love Ms. G.

Andrew: Where did the bunny get all those stuff? The bunny did an act of kindness. The bear was finding his friend. His friend was the bunny. I like the part when the bear found his friend.

Kassidy: I like when the bunny thought that the bear was the bunny. The bear put some honey near the rock and chocolate on the rock.

Grace: My favourite part is when he keeps falling asleep. It’s funny. Does he like the gifts? I also like it when he sings about how nice the bunny is. Why is the title Bear in Love? What’s he in love with? The bunny? The gifts? But I like this story!

1 thought on “Bear in Love”