This week we read a fantastic book that looked at the difficult subject of bullying and what it means to stand up together against bullying in a school community. 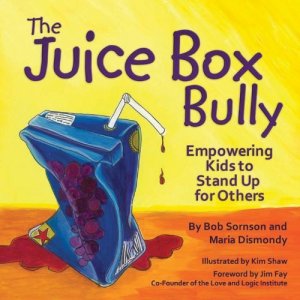 The Juice Box Bully: Empowering Kids to Stand Up for Others is coauthored by Maria Dismondy and Bob Sornson and illustrated by Kim Shaw. Many of the characters from Dismondy and Shaw’s Spaghetti on a Hot Dog Bun return in this story about a classroom that takes a stand against bullying.

In The Juice Box Bully we meet Pete, a new student at Mandell Elementary in Mr. Peltzer’s class. Pete has come in with a strategy he believes will work for him – bully others before they can bully him. But he doesn’t realize that he is the newest member of a classroom that has made a Promise – nobody will stand by and accept bad behaviour. When someone is mean, hurtful or disrespectful, everyone speaks up. So nobody accepts his behaviour but they also don’t accept when a classmate, in anger, tries to exclude Pete. This is shocking to Pete – “No one’s ever done that before, why did you stand up for me?” Ralph explains, “I’m not a bystander. I don’t stand by and let mean things happen.”

This book prompted a lot of very thoughtful discussion in our classroom. Students noticed that students teamed up together to speak out against mean behaviour. They were also pretty shocked at how mean Pete could be! When he continued to be cruel to students, it was pretty upsetting. “He should be expelled!” someone shouted. But one student didn’t think so, “No. When I was in trouble, I remember how you dealt with it. You talked to me and then talked to the other student. I learned why what I did was wrong.” Whew, good to know we do some things right!

When Pete admitted that in his old school he had been bullied, things began to make sense.

Ricky: “Bullying can be like a disease. It can spread.”

Miami: “He was acting like that to protect himself. But it was not in a good way protecting.”

Seriously, read children a great book to get them thinking and they are absolutely brilliant.

We were pretty impressed with the Promise that this fictional classroom had made.

Kevin: “If you bully it spreads but it doesn’t work in this class. They stand up for others.”

Jena: “We are learning about bystanders. That’s when you are just watching the bullying happen and not saying anything. In this book, they won’t be bystanders.”

Alyson: “Just watching is not helping – your tummy tightens up and it feels like you are turning into a bad person.”

Ricky: “It’s kinda hard though and sometimes it doesn’t work. It worked here because they were in a group.”

Kevin: “So they had more power!”

We discussed how this teaches us that we have to work together and be serious to create a community that will not tolerate bullying. Not easy. But absolutely essential. Big question: How do we create that feeling of community – starting in classrooms and spreading throughout the school?

1 thought on “The Juice Box Bully”