When I am away with my family in a quieter place – an island, the interior, anywhere NOT city, I always marvel at the stars at night. My first thought is usually that “regular” life is too busy to take notice of the mysterious and vast night sky. Time seems to lend itself to noticing – from the details of a tide pool lush with life to the open skies dotted with stars. But of course, there is another reason, I can’t star gaze as I look to these city skies: the city ay night is full of artificial light and our clear view of urban skies is impacted. This phenomenon is called light pollution.

Bright Sky Starry City written by Uma Krishnaswami and illustrated by Aimée Sicuro tells the story of little Phoebe who helps her father set up telescopes outside of his shop to observe a special event in the night sky. Saturn and Mars are going to appear together in the sky. She fills the sidewalk with chalk drawings of the solar system and her mind fills with wonders and worries.

Will she be able to see the planets? Will they remain hidden in the sky made gray and dull from the city lights? When a storm happens, rain and clouds make the chance to see anything in the sky even more unlikely. But when a rain storm becomes a thunder storm that shuts off the power in the city, Phoebe gets her chance to see stars and planets in a dark dark sky unaffected by the usual lights of the city.

A beautiful story of father and daughter, of a curious girl wondering about space and astronomy, of a glorious sky full of stars and constellations. 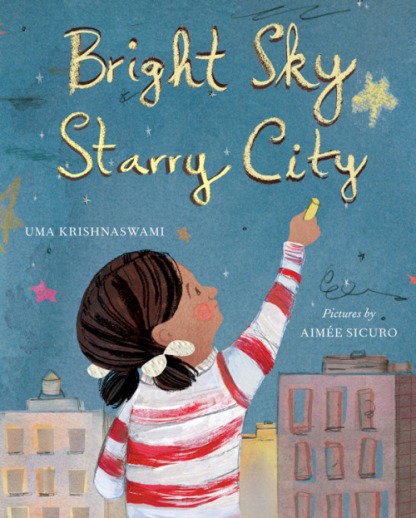 This book is a blend of fiction and nonfiction – a fictional story linked to facts about the night sky, the planets and their moons and the problems of light pollution. A nonfiction section in the back provides extensive details about the topics referenced in the book and includes a glossary and diagrams.

I am particularly excited to share this book with a classroom full of children who live in the city and look at a sky impacted by light pollution. I want them to think about a sky that is full of stars so beautiful and mysterious that it will spark wonder and awe. While this title is a blend of fiction and nonfiction, I would certainly use it to introduce a study of the night sky. The final pages explain that cities are often over lit and gives suggestions to make changes. We so often talk to students about turning off lights to save energy but how interesting and important to be able to suggest that turning off lights (or changing their orientation) can have other impact on plants and animals and their health and growth. A less lit night sky also means an increased opportunity to see all of the stars that are usually masked by light pollution. I know from my “vacation” star gazing, we are regularly missing an amazing nighttime scene.

Bright Sky Starry City is published by Groundwood Books (May 2015)