When I first read A Boy and A Jaguar written by Alan Rabinowitz and illustrated by Cátia Chien, I closed it, took a deep breath, opened it up and read it again. And then I began to think about sharing it with my students. Soon, I thought about it so much, I bought a copy for my classroom and finally, as part of a study about endangered animals, I am reading it aloud.

As we do in our room, we are taking our time with this title. There is much to share and discuss. We are now two thirds of the way through and our word list (recorded on a sticky note on the inside cover) is getting long: voice, stuttering, broken, fluently, promise, protected area, hunters, capture and release, Belize, endangered, wild . . . 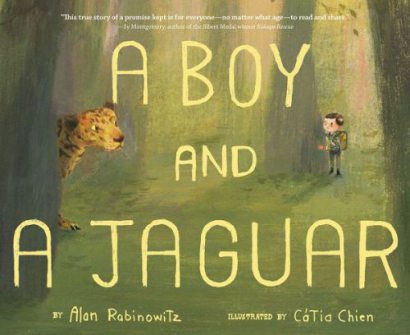 So far, we have talked a lot. What is it like to stutter? What makes a difference for Alan? Why does being around animals have such impact? What is his promise all about? Why does he feel so broken?

Students were honestly appalled that Alan was excluded from his classroom community. Many of them talked a lot about this. Lots of questions. Lots of upset. 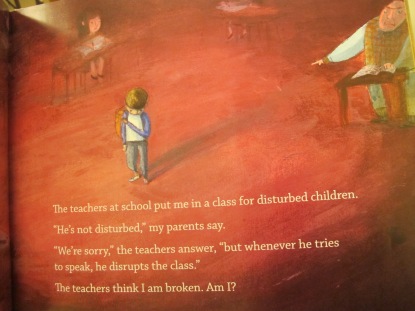 The children also felt sad that Alan continued to feel “broken” despite learning to speak without stuttering. 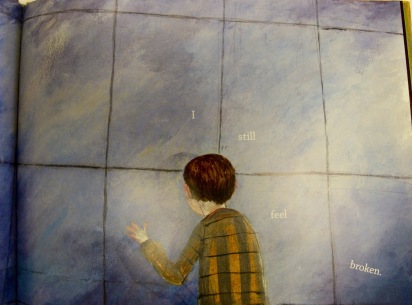 On this page, one child shared: “I think he has been told this so many times about himself, he doesn’t know how to feel differently.”

When the talk is powerful, the writing is powerful. Full of both passion and compassion.

Some student responses from this part in the story:

“I think he feels sad and lonely. His parents help him buy help from doctors. I wouldn’t want to be judged. I think the boy feels comfortable around the jaguars and hopeful and happy. He feels right talking to animals.”

“Alan was a little boy. He was stuttering. My class, we talked with each other about how he stuttered. It is sad having no friends. He is probably very lonely. Maybe he just sits on a chair and reads a book and minds his business. I think he goes to the zoo to see the jaguar and maybe this makes him stop stuttering.”

“If I was the boy, I think I know the cure because if he doesn’t talk when he talks to animals, so when he’s talking to people, he should imagine an animal. I think he should try practicing by talking to his parents. Of if he is shy, he could face his fears. I think he can always feel sad at school because he keeps stuttering and he has no friends.

“This book is about how Alan stuttered and his teacher would put him in time out or away because she thought he was broken. So he thought he was broken. But the good thing is that he could talk to animals without stuttering and he could sing. I wonder if he still stutters now? I think he can talk to animals because they don’t make fun of him and he really liked talking to jaguars. His Dad took him to the big cat’s cage probably so he can be happy because he likes talking to jaguars.”

“We’re reading a new book and I really like it so far. It’s called A Boy and a Jaguar. It’s about a boy who is a stutterer and he has a hard time talking to people but he can speak smoothly when he’s singing (but he says it’s not very good) and he can speak fluently when he speaks to his pets. Yes, that’s right, pets with a “s”. He’s got more than one pet. He’s got a turtle, a snake and . . . I forget the rest. It must have been hard for him thinking that he doesn’t fit in and that the teachers say he’s broken. When they say that to him, he questions himself “Am I broken?” But deep down Alan has to remember that he is not broken. He’s different in his own way. Everybody is different and the same and that’s why you don’t judge someone because if you put yourself in a stranger’s footsteps, you would actually know what their life is like. Alan makes a promise to his many pets that when he finds his voice, he would help his animals and animals in general. It’s toughing to read about a boy and that animals change his life. That’s why we shouldn’t treat animals horribly.”

We continued to read about how Alan went to Belize and studied jaguars. He was given 15 minutes to present to the government of Belize that they should make a protected area for jaguars. We stopped here and wrote again. 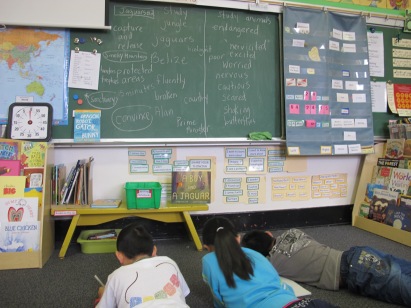 “I wonder if he still studies animals. I feel bad for the animals because they’re being hunted still today. I hope that Alan did not stutter to the government. I’m worried in 15 minutes he will stutter. I think he gots butterflies in his stomach and I think he’s nervous.”

“Alan goes to the Smoky Mountains to study black bears. Then he does his promise because he found his voice to go study and learn more about jaguars because he was the first person to study jaguars in Belize. That country is really poor so it will take lots of convincing power to build a jaguar sanctuary. I think he will think what he is going to say through and not stutter but maybe a minor stutter. I think he is nervicited (new word).”

“It’s sad to hear in this book that jaguars are in danger. I hope they don’t get extinct. Why do people do this? They kill animals for a shiny trophy? That’s not fair. Animals are just like humans. They care for their babies like humans do. Animals drink water, they eat like humans do. Humans are killing more animals than animals attack humans. Did you know that humans kill hundreds and hundreds of sharks year after year for their skin, their fins and even for medicine.”

“If I was him, I would write a script before I go to speak to the government because then I can speak properly and it has a better chance of no stuttering. I wonder if Alan will stutter? I wonder how Alan feels because I think he’s very nervous and worried.”

“When Alan knew that the hunters were on the loose, he wanted to find somewhere for them to be safe so he went to the Prime Minister. He only had 15 minutes. He seemed pretty nervous. He kept his promise that he made to animals. Hunters were trying to kill the jaguars so they are endangered. I hope that the Prime Minister says yes. It says he feels broken. At first I didn’t understand but then I thought and I got it. I think he feels pretty sad that animals like jaguars are dying.

I look forward to the continued conversations and thinking from my students as we finish this book this week.

21 thoughts on “Reading and responding: A Boy and a Jaguar”