Millie Fierce by Jane Manning was our BLG book today (read by Deborah :-)) 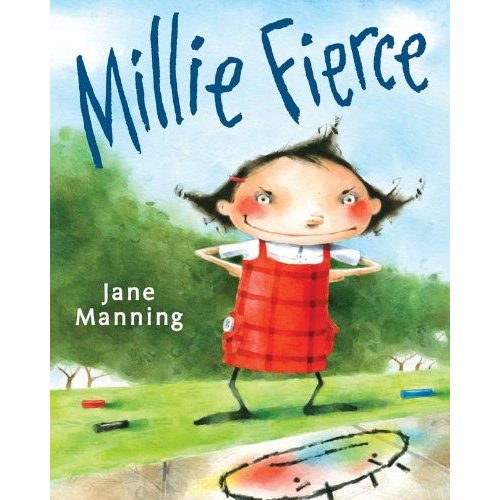 I read this book in early December and included this summary: This book explores finding an inner strength in a very honest way. It is not a simple thing to go from quiet to confident and the transformation is not always smooth. I have had students who when they finally shed their shy personas need some guidance about being polite and not hurtful with their words. Sometimes the words come before the social filters kick in. I thought of those children as I read this book about Millie. Millie doesn’t want to be ignored, she is tired of being “barely there” and unnoticed. So she becomes fierce. As she tries on this new found ferocity, she certainly gets noticed. But nobody wants to be with a Millie that puts getting noticed above being considerate or properly behaved. She even realizes that being fierce can be cruel. Finally Millie understands that she can be noticed for her kindness and consideration. This kind of attention is what feels right to her. I think this book could be quite powerful shared with a class and I look forward to the discussions that it might prompt.

Having Deborah read it today allowed me to sit back and watch the children react. They were quite serious during the story. Afterwards, certain things were highlighted in our discussion. Things that they mentioned made me realize how relevant background knowledge can be and how what we bring to a book is shaped by what we have learned. In our room, we just spent a few weeks reading stories with a kindness theme. Students noticed that Millie was kind at the end and some even called her actions acts of kindness. We also have done lessons from the MindUp curriculum and learned about parts of our brain. Children brought up that Millie was controlled by her amygdala and should have taken some breaths to make better decisions. Very sweet how the children brought these things to our discussion. We were all rooting for Millie. It was agreed that she would be happier being kind. The children identified many of the emotions she felt throughout the story: loneliness, sadness, jealousy, guilt, pride, relief, etc. A powerful little story to prompt discussion about how we treat each other and how we make ourselves noticed.

Kelvin: When she became fierce, she went home and messed up her hair. At the end, she clearned he Grandpa’s shoes and she loved to be small and quiet.

Vicky: My favourite part was when Millie Fierce was nice. Why did Millie be nice again?

Ethan: At first she was lonely. Then she got fierce. She made her hair spike up and freaky. she had loud boots like cowboy boots. She acted a bit like a devil. Evil like I don’t know how . . . Then she did some acts of kindness.

Andrew: Why when the three girls stomped on her picture, can’t Millie draw another flower?

Kevin: Why did she have a hard time to make a friend? Why did she take the cake and then feel guilty? Why did her amygdala take over?

Ava: I liked when she became fierce. Millie was lonely then fierce then she was nice.

Shereese: She was nice then she became mean because no one didn’t like her. Why no one liked her at the first?

Heman: Millie Fierce was lonely at the beginning. Her amygdala took over. I think Millie Fierce’s heart became fierce. Millie messed up her hair when she was fierce.

Kala: When she was being bad her heart got broken. But when she was nice, it got put back together. I like this book. I want to know from the author: Where were you born? I love you.

Gracie: Why did no one like Millie at the beginning? I liked it when at the end it said “Mostly.” To Jane Manning: You are a good drawer like my mom. She’s an illustrator for kids books. I think it was a good story. But why did she want to be so fierce? When she stole the biggest piece of cake, she felt guilty. I really liked the story. It teaches you a lesson: be nice to get peoples attention.