We were so pleased to welcome our long time BLG reader, Bill back on Halloween day! He bravely sat amongst the dragons, dinosaurs, witches and other creatures and read us the very entertaining book The Monsters’ Monster by Patrick McDonnell. 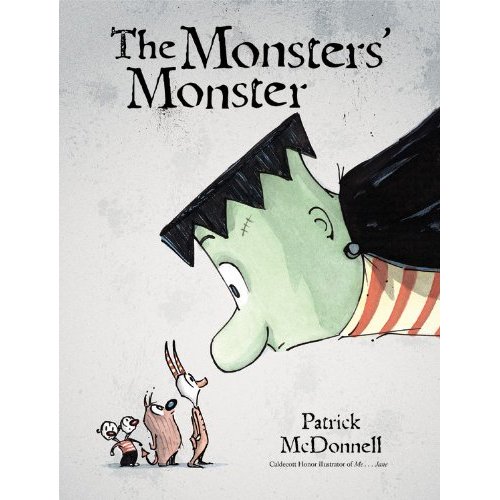 The main characters of this story are wanna be monsters who celebrate crashing and bashing, huffing and puffing and the shouting of the word, “NO!” They spend endless days arguing over who is the biggest and baddest amongst them. I must admit I think they are all quite charming and adorable, but thank goodness they don’t know that. Students also did quite a bit of tittering at their antics. Finally, Grouch, Grump and little Gloom ‘n’ Doom decide that they will together make the most terrible of all monsters. They fashion him out of various things including tacks, staples, gauze, gunk and a smelly old shoe. And then they hoist this monster creation into the stormy sky where he gets hit by a lightning bolt!

Bill is a fantastic reader and on the lightening bolt page he used a dramatic pause followed by a surprising boom and crash. There were some jumpers in the audience.  “I wasn’t scared,” announced the child that jumped the most. Of course not. 🙂

This monster, newly alive, is big and has a deep booming voice. He is everything these little “monsters” could ever have hoped for when they schemed him up. The only thing is that this big, bad monster is actually sweet, polite and charming. Instead of wanting to terrorize villagers, he wants to appreciate the fresh air and express his gratitude for life.

But even though, this big monster seems a disappointment to the little monsters three, he ends up offering them some positive inspiration. And . . . freshly baked jelly donuts.

McDonnell charms us all with this story and the children loved chatting about who their favourite monster actually was in the story. A book that will be read often and cherished in our library!

Andrew: My favourite part is when the lightning hit the Monster and went BAM! The monster came alive. The monster will be bad? I wonder does the monster like light?

Kelvin: My favourite part was the hoist cause it looks awesome! They created a monster, it was a big monster. I will create my own monster. A vampire!

1 thought on “The Monsters’ Monster”