Deborah has returned as one of our beloved BLG readers! This week she shared Little Beaver and the Big Front Tooth with us. This informative little book was written by Amy MacDonald and illustrated by Sarah Fox-Davies. 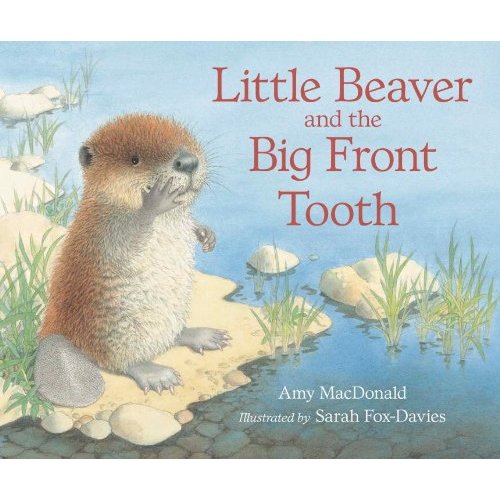 Little Beaver is very upset. He won’t even come out to play with his friends. The source of his worries? One of his big front teeth was loose. If it fell out, would he still be a beaver?

He  stared at his reflection for a long time and then it came to him. Maybe he wasn’t a beaver at all! Perhaps he was a woodchuck! He went to find woodchuck to ask. Woodchuck explained that he could not be a woodchuck because he lived in a mud house not a hole. Well Little Beaver knew that muskrats lived in mud houses, so maybe he was a muskrat. But Muskrat explained that muskrats eat fish. Beaver ate bark. He couldn’t be a muskrat. So maybe he was a porcupine! Porcupines eat bark!

Well! This was quite alarming to the students! “No way!” “He has no spikes!” “What!?” One student knew prcupine’s answer, “Porcupines live in trees!” Poor Little Beaver was quite confused. He decided to ask Wise Old Beaver. Wise Old Beaver lived in a mud house the text read. This line prompted a big debate.

“He doesn’t live in mud, he lives in sticks.”

Students enjoyed learning about the other animals in this story and joined in with parts where information repeated. This was Deborah’s first book with us of the 2012/2013 year. She handled our eager and active listeners very well, taking all comments and questions in stride! My favourite?

Student: “What if the beaver doesn’t have a reflection? Because if he doesn’t then he is a vampire.”

Kelvin: My favourite part was the mud house because it have protection. I think if I was the beaver, I will pull my tooth.

2 thoughts on “Little Beaver and the Big Front Tooth”