Our BLG reader this week was Maria. She read the charming Calvin Can’t Fly: The Story of a Bookworm Birdie – written by Jennifer Berne and illustrated by Keith Bendis. 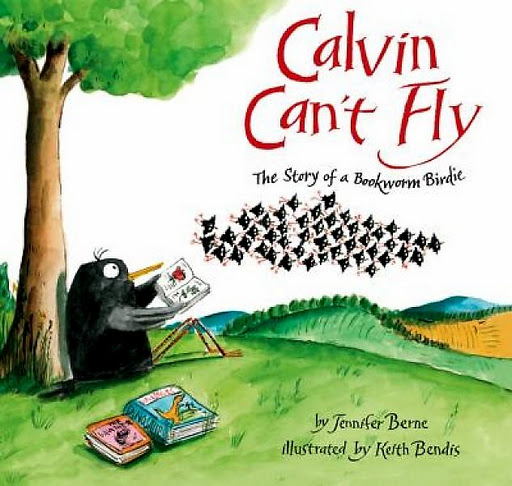 Calvin is a little black starling who is born with a passion for . . . books! He immerses himself into the world of adventures, legends, space, and drama. Places that he could never travel to in flight. And, there was one other small problem when it came to flying: having spent so much time with his “beak in a book,” Calvin actually had never learned to fly! When the group of little starlings were working on swooping and hovering and flying, Calvin was at the library! His starling cousins were not very understanding – he was called a “nerdy birdie,” a “geeky beaky” and a “bookworm.” Being a bird, Calvin took special offence at being called a worm!

When it was time to head south, Calvin was grounded. His flock was not about to abandon him however and he was carried along literally (by strings around his middle) on the starlings’ journey south. On route, Calvin saved the flock with his knowledge about hurricanes derived from a book about weather. In his excitement while celebrating his life saving heroics, Calvin begins to jump and hop and flap. And . . . yep, you guessed it! Calvin began to fly!

We love how reading and literacy are celebrated and that knowledge turns out to be the hero!