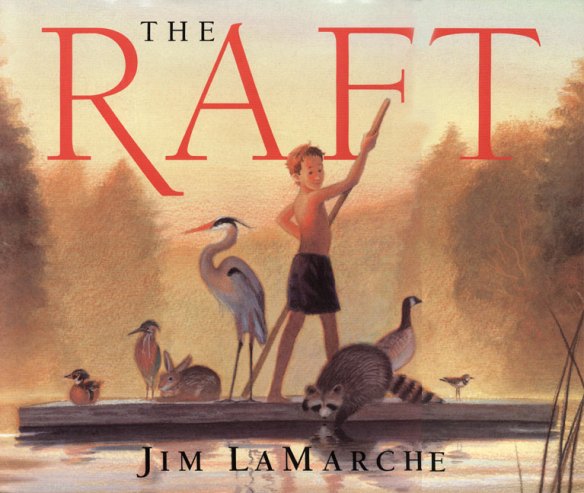 The Raft tells the story of Nicky who has come to spend the summer with his grandmother. He isn’t very eager to do this (bemoaning being away from television and any kids all summer) but it doesn’t take long before Nicky finds himself fascinated by his summer locale. A raft covered in leaves and branches floats up and bumps against the dock Nicky is fishing on. It is covered in drawings of animals and it completely captures Nicky’s imagination. Where did it come from? Who painted the animals? What does it mean? Soon he and his grandmother are spending lazy days poling down the river. An array of animals keep Nicky company – foxes following him along the shore, birds hitching a ride, a great blue heron snacking on crayfish. Nicky often takes the raft out alone and sketches all of the animals he sees. Somehow the raft seems to draw the creatures to him.

The students noticed the changes in Nicky.

Miami: “He’s been transformed. He was so grumpy when he came to his Grandma’s and now he’s not.”

Hajhare: “I think he was set up. Do you know what I mean Ms. Gelson? His Dad tricked him into liking his summer. His Dad knew he was going to like it all along.”

Finally,  Nicky adds his own animal to the raft for a very special reason. Students were lulled by the beauty and magic of this book and eagerly wrote down questions as I read.

I then gave the students a task: Choose 2-5 of your deep thinking questions and list them in your notebook. Choose one and try to answer it (You will need to infer)

Kevin put his hand up. “But I can’t just put 5. Each question leads to another question so I’ll need to write 10. I “inferenced” as I thought them so I included them when I did my writing.” (Yippee! Learning!)

Some samples of student thinking.

Jena: Are all of the drawings adventures of how people saved animals? Maybe yes and the raft was made and passed on from generation to generation.

Lisa: One of my questions before was that are the animals from the raft going to come alive. Maybe if Nicky visualizes, they will come alive to him.

Ricky: Who drew all of these animals on the raft? Why is Nicky’s Grandma called a river rat? Did she also save an animal on the river? Maybe a rat? Is Grandma part of nature?

At the end of the book, Scott sat back and said, “That book was awesome.” When I asked him why, Eddy piped up. “It’s really making me think thinking stuff.”

I think this should be our new measure of success when we judge a reading experience – did we think thinking stuff? Does book really inspire our thinking voice? The Raft did and then some. It left us talking with each other, following a question into an inference and going back into the story to try and find clues, having “but what if. . . ” discussions all around the room. A wonderful book.